Voltaire’s literary and personal evolution during his exile

Today is the birthday of French writer, historian, and philosopher François-Marie Arouet, better known by his nom de plume, Voltaire (books by this author), born in Paris (1694). 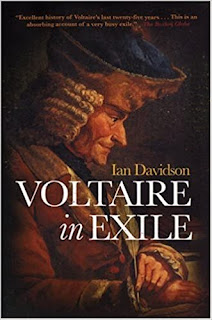 François Marie Arouet was born in Paris in 1694. As the third child in an upper class bourgeoisie family, the young François - who changed his name to Voltaire when he was twenty-four years old - became one of the most famous and most successful writers in the history of France. Voltaire was phenomenally famous during his lifetime as the leading French author of neoclassical verse dramas (having written twenty-seven tragedies and a dozen comedies), as an internationally renowned poet (compared favorably at the time to Virgil), and as the author of half a dozen weighty volumes of history. He also enjoyed prestige as a leader member of the French Enlightenment, a so-called philosophe, and as a contributor to the great intellectual enterprise of the era, the Encyclopédie.Beginning in 1750, however, Voltaire began to fall prey to the fickle temperaments of politically insecure despots in France and Prussia. In 1753, the situation reached a crisis stage, and - for reasons that are forever obscured by a lack of official documentation - Voltaire was exiled from his beloved Paris. Exile was the French court's frequently employed instrument of repression and rejection, and Voltaire as persona non grata was inexplicably no longer tolerated by the French monarchyVoltaire was forced to make a life for himself elsewhere. He settled first in Geneva (and lived later in Lausanne and Ferney) with Marie Louis Denis (Voltaire's niece - and lover - who was eighteen years younger than the famous writer). Even though Voltaire's political and social exile (and ostracism) would seem to modern readers to have been a likely prescription for despair, the year 1753 was the beginning of the happiest and arguably most productive quarter century of Voltaire's life. Voltaire in Exile is a magnificent story of a great man's literary and personal evolution. Ian Davidson's exquisite study begins by briefly recounting the years leading up to Voltaire's exile and then continues at length by providing intriguing insights into the years during which the exiled playwright, poet, and historian became the author of Candide (Voltaire's canonical masterpiece) and (eventually) one of the era's most profound advocates on behalf of human rights. Drawing heavily upon Voltaire's prolific correspondence - the complete edition of Voltaire's correspondence in print totals 15,284 letters - Davidson, through fascinating details and compelling narrative, demonstrates the ways in which the gregarious, affable, and extraordinarily wealthy Voltaire managed to enjoy 'real happiness, perhaps for the first time in his life' (enjoying the leisure to simply cultivate his gardens on his comfortable estates) and, at the same time and more significantly, became increasingly concerned with the problem of evil and with the allied problem of man's inhumanity to man. The bottom line is this: If you want to better understand and appreciate Voltaire, Candide, and one of the most interesting eras in literary, intellectual, and cultural history, you simply must read Davidson's brilliant book.